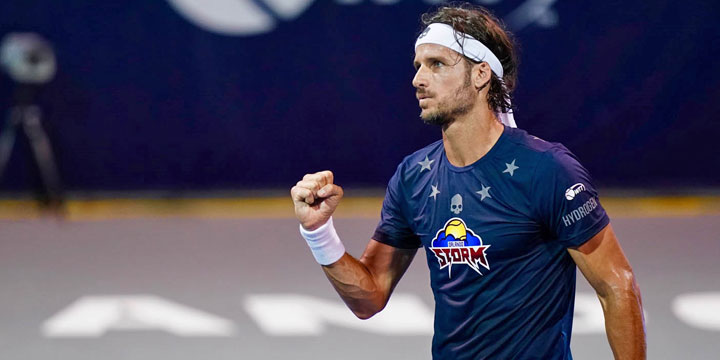 ORLANDO, Fla. – The Orlando Storm topped the Orange County Breakers by a score of 22-19 on Monday night to improve to 2-0 in their inaugural campaign.

“I’m happy with how we’ve started both matches,” said Orlando head coach Scott Lipsky, “Our doubles play has been strong, we have a lot of really good players. Whitney played great in singles and Feliciano did a nice job of closing things out again.”

The night began with mixed doubles as Orlando’s Ken Skupski and Darija Jurak were matched up against Andreja Klepac and Luke Bambridge of Orange County. Both sides held serve until the seventh game when the Breakers held true to their name, earning the only break of the mixed doubles set to take a 4-3 lead. Klepac held serve to seal the 5-3 victory in mixed doubles.

After surrendering a lead for the first time this season, Orlando’s women’s doubles tandem of Jurak and Whitney Osuigwe were tasked with closing the gap against Orange County’s Klepac and Nicole Gibbs in women’s doubles. The first three games were close, each going to a deciding point. The Breakers took the first game while Orlando earned the next two, earning a break on the later. The two teams would trade breaks after that as Orlando sat with a 3-2 lead. From there, Orlando would go on to win two more deuce points to take the women’s doubles set by a score of 5-2 and a match lead of 8-7.

What a start to the season for the expansion squad! 🔥@OrlandoStormWTT ⛈️ win another close match, needing extended play to take down the #OCBreakers 🌊 22-19 as they improve to 2-0 on the season! @feliciano_lopez wraps up the night again! #WTT2019 #EveryPointCounts #OCvsORL pic.twitter.com/Xhjt0MZloy

“Darija is great; she’s is a pretty experienced doubles player,” said Osuigwe. “She’s been giving me little tips here and there on what I need to do and I’m just following them and trying to get better because I really enjoy playing doubles.”

Men’s doubles saw another tight contest as Skupski and Feliciano Lopez took to the court for the Storm as they faced Bambridge and James Ward. Both sides held serve the entire set, sending the frame to a tiebreaker. Orlando came storming out in the extra segment, holding serve on the first two points. The Breakers did the same for their first point of serve, making the score 2-1. From there, Lopez and Skupski took control, winning the final three points of the tiebreaker and winning the set 5-4 (5-1). Orlando took a 13-11 match lead into halftime.

“It’s interesting that both Lopez and I are lefthanded,” said Skupski. “I think that’s a massive deal. A lot of teams struggle to play against lefties and to play against two is quite unique. I think a lot of opposing players won’t like that.”

Women’s singles was next as Orlando’s Osuigwe stared across the net at Gibbs who took an early 3-1 advantage over Osuigwe with a break in the fourth game. But just as last night, Osuigwe was not phased by a deficit as she collected the final four games for a 5-3 victory. In the final game, Klepac subbed in for Gibbs on the Breakers side at 15-0 to try and mount a comeback, but failed in doing so. The Storm took an 18-14 lead into men’s singles.

“I guess I play better if my back is against the wall,” said Osuigwe with a laugh. “Coming off the bench cold is pretty difficult, I’m still getting used to starting well in that situation. As soon as I got warmed up and got into it I just did my best to comeback and win.”

In the final match of the night, Lopez took to the court for Orlando as he faced Ward of Orange County. The two stayed on serve through the first four games before Ward broke Lopez’s serve. Ward continued his momentum and won two of the final three games to win the set 5-3. Because Orange County won the final set, it sent the match to extended play.

In extended play, the trailing team gets a chance to play catch up. With the score at 21-19 after five sets, Orange County needed to win two consecutive games to force a super tiebreaker. If Lopez won a game before Orange County could tie it, the match would end in a Storm victory. The first game in extended play would be decided by the outcome of a deciding point. With Lopez serving, he took care of business to seal the match with a 22-19 win for Orlando.

The Orlando Storm have won their first two matches of their inaugural season to move to 2-0. Orange County drops to 0-1 on the season.

During halftime, a few lucky kids from the crowd got to take on Orlando’s Evan King in a quick serve and volley.

Another great crowd of tennis fanatics showed up to the USTA National Campus to watch the second match of the Orlando expansion franchise. Rain that was in the area prior to the match didn’t deter the fans as the storm clouds yielded a few hours prior.

The Orlando Storm hit the road to take on the defending-champion Springfield Lasers on Tuesday, July 16 at 7 p.m. ET. Orlando will return home to face the San Diego Aviators on Wednesday at 7 p.m. ET. Watch live on CBS Sports Network or WTT.tv or follow along on WTT.com or at orlandostorm.com.