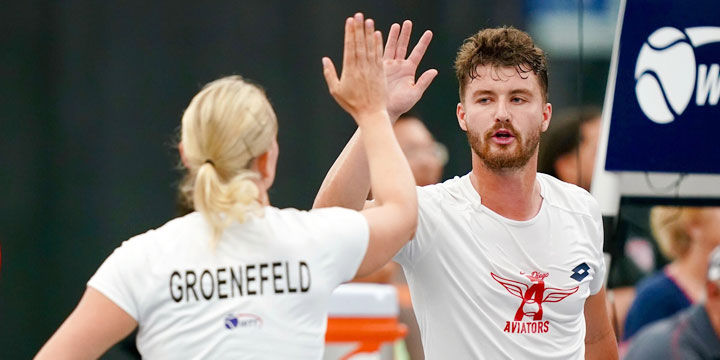 ORLANDO, Fla. – Wednesday’s match between the San Diego Aviators and the Orlando Storm got off to an intriguing start, but ended with a rather tame outcome as the Aviators defeated the Storm by a score of 25-15, winning all five sets.

“We played the big points very well today,” said Aviator head coach John Lloyd, “It was just one of those days where it all clicked, it was fantastic. To be honest before the match, I was not expecting to win five sets. I was very confident with having Ryan [Harrison] at the end of the match with the way he has been playing, so I wanted to either be ahead or close for him to close the fifth. They were all brilliant tonight.”

With lightning in the area and storms approaching right around scheduled start time, the match had to be moved into the Adidas Performance Center, an indoor facility with six courts located on the USTA National Campus. That meant a transfer of players, fans, television equipment, concession stands and so much more. All went smoothly though and the fans were as enthusiastic as ever to watch the Orlando Storm play their third home match of their inaugural campaign.

The match got underway at 7:37 p.m. with mixed doubles as Darija Jurak and Ken Skupski took on San Diego’s Anna-Lena Groenefeld and Jonny O’Mara. San Diego struck first with a break and then held serve to open with a 2-0 lead. Trailing 3-1, Jurak and Skupski attempted to mount a comeback and played three consecutive games to a deciding point. They got the first one to trim the deficit to one game, but San Diego took the remaining two and won the mixed doubles 5-2.

Women’s doubles was the next event of the night as Madison Keys made her season debut for Orlando as she was paired with Jurak to try and erase the deficit. The Aviators sent Christina McHale and Groenefeld to defend their advantage. Keys and Jurak imposed their will out of the gates, taking two breaks in the first three games and going up 3-0 to tie the match at 5-5. Coach Lloyd then picked the perfect time to burn a GEICO timeout to talk to his troops.

“We were in trouble there and I was getting worried,” said Lloyd, “I was thinking this had a chance to go to 5-0 which would’ve been tough, so I told the ladies to stay back on their serves to try and get Madison and Darija off their rhythm. Then it just sort of started turning around, they were in the points, and then they built on it and suddenly the whole thing changed.”

San Diego was able to rebound and take two breaks back and win four of the next five games to force a tiebreaker. The Aviators were able to complete the comeback as they took women’s doubles by a score of 5-4 (5-3) giving them 10-6 match lead.

“It ended up being a pivotal moment for our team,” said McHale, “They got off to a really good start, I don’t thing we were ready for Madison’s power, and then we changed up our tactics a little bit and that helped us gain some momentum.”

Doubles play concluded with men’s doubles as Feliciano Lopez was joined by Skupski for the Storm as they squared off with Ryan Harrison and O’Mara. The Aviators earned the first break of the set in the third game to take a 2-1 lead, both of their game victories coming on deciding points. From there, San Diego kept control of the set and took the frame 5-2 to take a 15-8 match lead heading into halftime.

The Storm needed a rally in women’s singles to get back in the match as San Diego’s McHale was matched up against Keys. McHale held serve and then forced a break to take the early 2-0 edge. Down 40-0 in the third game, Keys came all the way back to force a break of her own. McHale took the next two games to go up 4-1, but Keys fought back. She proceeded to take the next two games to give herself a chance. However, McHale was able to take the eighth game and a 5-3 victory in women’s singles to put her team up 20-11.

“It helped to be able to see and return her serve in doubles, I think that helped me in singles,” said McHale, “I already had a feel for it and knew it was strong. The sets are so short so you’re just trying get an advantage where you can in some games, and I just competed hard.”

In the final event of the evening, San Diego’s Harrison looked to complete the sweep with a win in men’s singles over Lopez. He started on the right track, breaking Lopez to start and then holding serve in the next game. Lopez did not go quietly as he won the next three games to take a slight edge. The two traded the last three games, forcing a tie breaker. Harrison took the early advantage, going up 2-0 and never looked back as he went on to win 5-4 (5-2) to seal a 25-15 victory.

“We tried our best today,” said Storm head coach Scott Lipsky, “We had tough conditions today, we got back from Springfield around 4:00 a.m. so it was tough, but everyone had a positive attitude during the match. San Diego played really well, it wasn’t like we were doing anything poorly, they just took it to us.”

The Orlando Storm are back in action at home on Thursday, July 18 at 7 p.m. Eastern as the Philadelphia Freedoms come to town. Watch live on CBS Sports Network or WTT.tv or follow along on WTT.com/schedule or at orlandostorm.com.