Let’s Pass Out the 2020 Midseason Awards aka #WTTrophies 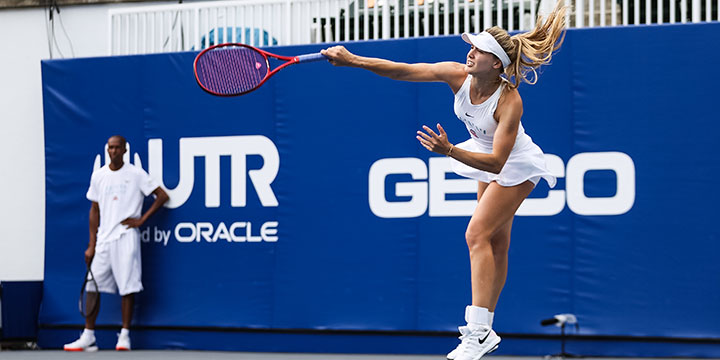 WHITE SULPHUR SPRINGS, W. Va. — With nine days of play complete, the middle of the season is arriving faster than a Taylor Fritz serve. As players move into the second part of the season, it’s time to hand out some awards.

At 18, Nakashima is the youngest player in the 2020 field, but he’s certainly playing like he belongs. Having only made his ATP debut in February, Nakashima is holding his own against some of the best players in the world. So far, the world No. 220 has gathered wins over Sam Querrey, Steve Johnson, Ryan Harrison and Jack Sock. His two losses have come against Tennys Sandgren, both by a tight 5-4 margin.

In Friday’s match between San Diego and Orlando came down to men’s singles between San Diego’s Harrison and Orlando’s Sandgren. With the teams tied at 20-all, Sandgren came up big to win the 7-5 Supertiebreaker—though he was technically assisted by a huge Eastern Dobsonfly interrupting Harrison’s backhand.

With nine Grand Slam doubles titles to her name, Mattek-Sands is a natural leader on the court and she’s found a very eager partner in Bouchard. Teaming up for Chicago, the duo put up four wins in a row after dropping their first match together.

“I just say look just tell me what to do and I’ll do it,” Bouchard said. “She calls the plays all the time and I just try to follow and try to keep up. I think we match well together, we’ve had some fun.”

There are many, many outdoor activities at The Greenbrier to choose from. The Philadelphia Freedoms as well as Coco Vandeweghe, Bouchard and Sandgren have all tested their aim with a visit to The Greenbrier Gun Club.

Vandeweghe would hit 15 of 25 targets when she picked up trap shooting.

“It was so much fun,” she said. “I didn’t know how good I would be since I haven’t shot a gun since I was 16. That was really fun to track a target and try to shoot it.”

As an alternate, Hailey Baptiste has spent a lot of time at The Greenbrier practicing, watching matches and walking her dog, Tsonga. Named after Frenchman Jo-Wilfried Tsonga for his distinct forehead wrinkle, Tsonga is a five-year-old Ori Pei (a pug sharpei mix). He enjoys hanging out under tables and giving Harrison’s dog Sky kisses.

“He’s really calm” Baptiste said. “When he’s around other dogs he always wants to play. He’s really polite and he’s got good etiquette.”

The new normal has changed a lot of tennis’ traditions and rules, like having no linesmen or ball kids. Since totally eliminating the high five and group huddle was not an option, teams have had to get creative to pump themselves up. Springfield introduced the foot shake dance for their walk outs, getting the idea from the popular TikTok challenge.

All of the babies and children at The Greenbrier are adorable and well-behaved, but since Jake (Mike Bryan’s son) is the youngest at just three months, he deserves the credit. He will not remember watching his dad compete for the Las Vegas Rollers this month, but he can certainly say he was here, and even awake for some of it.

Every teammate has done a great job of picking up balls and handling ball person duties. What sets Las Vegas’ Querrey apart is his bucket hat (purchased from The Greenbrier gift shop) and his strategy of keeping cool with an umbrella in his hand while running.

“We’ve got a lot of day matches so I didn’t want to bake in the sun,” Querrey said. “So I went and bought it just to avoid cooking on the bench.”

Having played doubles for Chicago Smash all season, Bouchard got her shot at singles on Sunday when Sloane Stephens was down 3-1 to Orlando Storm’s Danielle Collins. Bouchard got her rhythm fairly quickly, and stormed back to win 5-4, helping Chicago win 24-19, even raising her arms in glee.

On Tuesday, Fritz laid down the hammer on his service games against Mitchell Krueger with twos aces over 140 mph. The first was clocked at 144 mph and his second came on match point. Fritz has lost just one singles set so far (to New York’s Jack Sock), and his team, the Philadelphia Freedoms, are in first place with a 5-1 record.

Collins hasn’t had the smoothest ride this season for the Orlando Storm. Through the ups and downs, there have been moments of brilliance followed by utter frustration. When she lost to Bouchard on Sunday, she let out her emotions with a few racquet smashes, though none of them seemed to actually break the frame.

He might be in his first season of WTT action but Arevalo has found his groove. The Washington Kastles’ doubles star has been bringing energy and charisma to his team, and when the beat hits right, he’s not afraid to show his appreciation for the DJ with some of his best dance skills.

Most Annoying Bug: The Moth.

The moths in White Sulphur Springs descend by the hoards in many varieties and sizes. Though they’re also around during the day, the moths really come to play at night, and are very attracted to stadium and TV lights, as well as to host Nick Gizmondi’s face.

At No. 4, Kenin is the highest ranked player in the 2020 field and she’s playing full of confidence as the reigning 2020 Australian Open champion. Suiting up for the Philadelphia Freedoms, the 21-year-old is taking each point as seriously as she did all fortnight long in Melbourne, and is getting to test her level against some of her idols like Venus Williams, who she beat 5-1.

The 37-year-old is one the comeback trail and trained hard for her season with the New York Empire. Thirsty for matches after getting just two in before the shutdown, Clijsters is playing both singles and doubles. The former No. 1 hasn’t lost a set in singles, having beaten Bernarda Pera, Stephens, Olga Govortsova and Danielle Collins (twice).

Nina Pantic is a tennis writer, editor, podcast host and content producer. She played collegiate tennis at UCLA. You can follow her on Twitter at @NinaPantic1