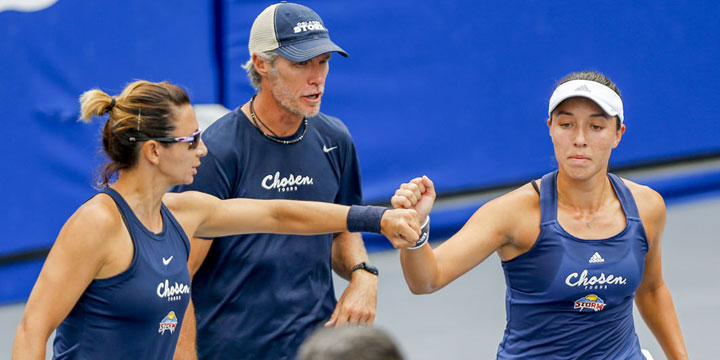 The Orlando Storm won the first eight games of Saturday’s match against the Philadelphia Freedoms en route to a 23-13 statement victory.

The Freedoms (8-2) entered the morning as owners of a six-match winning streak. They sat a full game clear of the Chicago Smash atop the World TeamTennis standings and three games ahead of the Storm (6-4), who had moved into third place after a couple of recent wins.

PHILADELPHIA FREEDOMS vs. ORLANDO STORM MATCH STATS
But it was quickly evident which team was better on this day.

Tennys Sandgren and Ken Skupski came out on a mission in men’s doubles and put up an essentially flawless, 5-0 performance against Donald Young and Fabrice Martin. One of Orlando’s few errors of any sort came when Sandgren tripped and fell backward while trying to guard himself against a hard return near the net. He got up, shared a few laughs with his teammates and shook off any embarrassment by ripping a backhand winner down the alley on the next point.

#WTT2020: @GuaranteedRate Player of the Match @JLPegula sat down with @NickGismondi after playing the middle three sets in a row in the @OrlandoStormWTT's 23-13 win over the first place @PhillyFreedoms. She chats about starting strong, her win over @SofiaKenin and more! pic.twitter.com/KkP8YRLaWa

A couple of games later, Sandgren captured a break point to go up 4-0 with a sharp forehand that got a little help from the net cord and couldn’t be returned by Martin. Although the set wasn’t over just yet, Sangren and Skupski did a jumping chest bump after that point, a la the Bryan brothers. It would take Orlando’s duo just 16 minutes to finish the set.

“Right away with the men’s doubles, they just kind of set the tone for the whole day,” Jessica Pegula said. “We honestly just played really solid the rest of the day and we just took care of business.”

Pegula was up next in singles action versus Sofia Kenin, the 2020 Australian Open champion and the highest-ranked women’s singles player in WTT this season at No. 4 in the world. But Pegula had won both of their previous meetings and came out on fire Saturday to take an early 3-0 lead. Kenin fought back by winning the next two games, including a break of Pegula’s serve at love. She became the more aggressive player, shooting balls into each corner of the court and making Pegula run all along the baseline to keep points alive.

The crucial moment came with Pegula up 3-2 in the set and holding a couple of break-point opportunities following two double faults from Kenin. After Kenin saved one break point to move the game to 40-40, she tried to win it with a drop shot that eked over the net. But Pegula pounced on it and fired a cross-court forehand to go up 4-2. She would hold serve in the next game to give Orlando a commanding 10-2 advantage.

“Sofia is tough for me to play because she loves directing pace,” Pegula said. “That’s what she does so well, and I like to hit the ball hard. Honestly, I thought I had to play a little defense and kind of mix it up, which isn’t really something I love to do, but I’ve been getting so much better at it in those situations. She started playing pretty well there for a couple of games and I had to kind of figure it out.”

Philadelphia’s only set win was a 5-3 triumph for Fabrice Martin and Taylor Townsend in mixed doubles. They got past Pegula and Skupski, but Pegula would return for her third set immediately afterward and regain that lost ground in women’s doubles. She and Darija Jurak handled Townsend and Caroline Dolehide, 5-3.

The door was ever so slightly ajar for the Freedoms to mount a comeback during that set. They had cut Orlando’s lead to 16-10 and were two points away from breaking Jurak serve and sending the set into a tiebreaker. But at 30-30, Jurak backhanded a ball right into Dolehide from close range. She then sealed the set on the next point with an ace.

The cherry on top was Sandgren beating Taylor Fritz, WTT’s highest-ranked men’s singles player at No. 24, by a score of 5-3.

With this streak-snapping victory, it’s now the Storm who are on a roll. They have won their past three matches.

— That 5-0 result to open the match was the first time Philadelphia has been shut out in a set this season. It was Orlando’s second set sweep of 2020.

— The tandem of Jurak and Pegula have won 15 of their past 20 games in women’s doubles.

— After struggling to put away break points in recent matches, the Storm converted six of eight break points Saturday. Conversely, their opponents have scored break points just 31% of the time in Orlando’s last three matches.

The Storm will open up Sunday’s action at The Greenbrier with a match against the Springfield Lasers. The match will be broadcast at 9 a.m. ET on ESPN+. The Storm beat the Lasers back on the season’s opening day, 21-18.

Brian Murphy is a writer based out of Orlando. He helps cover UCF athletics for SB Nation.
You can follow him on Twitter @Spokes_Murphy