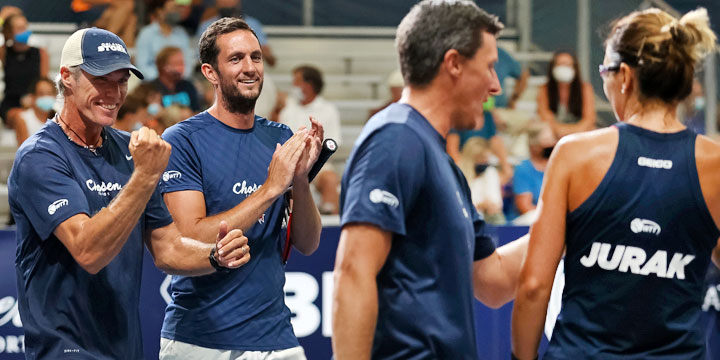 The Orlando Storm are headed to the World TeamTennis playoffs.

The Storm punched their ticket to the postseason with a 23-21 triumph over the New York Empire on Tuesday night. Orlando’s sixth consecutive victory improved its record to 9-4, ensuring that they will make the franchise’s first trip to playoffs as no worse than the No. 3 seed.

ORLANDO STORM vs NEW YORK EMPIRE MATCH STATS
All of the buzz coming into the match revolved around New York’s new-look women’s doubles team of Coco Vandeweghe and Nicole Melichar, who were acquired from the San Diego Aviators on Sunday night, right before the league’s trade deadline. They entered Tuesday as winners in 64% of their games together, a league-high rate.

And after Vandeweghe and Melichar broke the Storm at love to take a 4-3 lead in their set against Jessica Pegula and Darija Jurak, it looked like the hired guns would give the Empire both the lead and momentum heading into the night’s final set.

#WTT2020: @GuaranteedRate Player of the Match @JLPegula chatted with @OliviaDekker after playing 3 sets in a 23-21 win for the @OrlandoStormWTT over the @nyempiretennis to clinch a spot in Playoffs! She talks about the Storm's momentum, the team chemistry and more! pic.twitter.com/J5nJC6x3zb

But the Storm battled back in the next game to give itself two break points. Although Vandeweghe saved one with an overhead smash, Melichar’s double fault at 40-all meant that the set would rest on a tiebreaker.

Jurak helped Orlando shoot out to a 3-0 advantage with a couple of winners. New York took three of the next four points to draw closer, but at 4-3 and after Jurak and Melichar engaged in a back-and-forth of crosscourt forehands, Jurak sent a ball up the near sideline and right at a drawn-in Vandeweghe. Her volley return traveled long, clinching the set for Orlando.

“I know I’m the player of the match, but that was totally a team effort,” said Pegula, who won two of her three sets on the evening. “With a score that close, every single match counted. Every single game counted. My partner Darija played unbelievable.”

The women doubles victory gave Orlando an 18-16 edge with only men’s doubles remaining. It was a set that the Empire, with Jack Sock and Neal Skupski, had claimed easily against Orlando’s Tennys Sandgren and Ken Skupski 12 days earlier. Plus, Sandgren had lost a tiebreaker to Sock in men’s singles, 5-4 (0), about 40 minutes earlier. Then whenever he was shown during the broadcast between his two sets, Sandgren was seen sitting alone on the Storm’s bench, just starting off into the distance.

At one juncture in the final set, the Storm trailed 2-1 and faced two break points. Given what had happened both earlier in the night and nearly two weeks ago, it looked like the match might be slipping out of Orlando’s grasp.

However, after Sandgren’s winner at the net, Sock flubbed his return of Skupski’s serve, giving the game to Orlando and tying the set. The elder Skupski let out a ferocious roar as the Storm had finally found some life.

Sixteen of the next 18 points were won by the serving side, leading to a set tiebreaker that New York would sweep, 5-0. The Empire needed to take just one game in Extended Play to continue matters in a Supertiebreaker. But that’s when Sandgren stepped up most. Although he struggled with his first serve for the entire set, he won the first two points of the game with a couple of second-serve service winners toward Neal Skupski.

At 30-love, Sandgren chased down a second-serve return — nearly crashing into that same bench where he sat seemingly expressionless for a full set — and was somehow able to send it back over to the far side of the court at a tight angle toward Skupski. His forehand went into the net.

Finally, with four match points on his racket, Sandgren sent another forehand Skupski’s way, resulting in another errant return. Sandgren pointed at his partner and pumped his fist. No matter how disappointed he was in his singles set, that was irrelevant now.

While Orlando won’t carry any stress into its final regular-season match, the Empire (6-6) are tied with the Washington Kastles for that fourth and final playoff spot with two games remaining on their schedule.

— Pegula beat Vandeweghe in singles action, 5-2. She has won five consecutive singles sets and is 7-1 on the season. Her 65.6% winning percentage in singles games is second-best in the league, trailing only the Empire’s Kim Clijsters, who is at 66.7% Clijsters hasn’t played a singles set since July 24 and has sat out New York’s past two matches due to an abdominal strain.

— Sandgren fell to 7-6 in singles action this season. But he has done plenty of winning even in defeat. Five of those six losses went to a tiebreaker, meaning Sandgren won four games for his team in each of those sets.

The Storm will wrap up their regular season on Thursday versus the Washington Kastles (6-6). The Storm and the Kastles faced off on July 21; the Storm came out on top, 23-17. The rematch will be broadcast on Tennis Channel at 4 p.m. ET.

The Empire’s next opportunity to help their playoff odds will come Wednesday against the Orange County Breakers. A New York win coupled with a Kastles loss to the Vegas Rollers would give the Empire the No. 4 seed in the playoffs. The Empire’s match will be shown on Tennis Channel at 3 p.m. ET. The Kastles-Rollers match will follow at 6 p.m. ET.