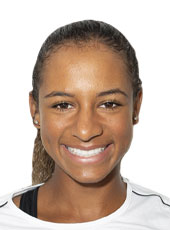 Former Junior World No. 1. In 2017, Whitney won the girls singles title at Roland Garros becoming the first American to do so in 28 years.

Coached by Roger Anderson... Has been playing at the IMG Academy since age 6 ... Father Desmond is originally from Nigeria and has been a tennis pro at the IMG academy since 1997 ... Older brother named Deandre who is a college basketball player and a younger sister named Victoria who also plays tennis.